At a recent seminar held at die Preluna Hotel, the Foundation for Pre-Historic Research Malta  headed by Dr. Hubert Zeitlmair and Dr Hergen Meyer – discussed the findings of their year-long research into prehistoric temples. Speaking to this newspaper, Dr Meyer said that they are at a very exciting point in their research. He explained that the megalithic temples followed the lines of what he described as “a global energetic field”.

“The civilization that erected the Maitese temples”, he said, “was more sophisticated than the accepted theory gives them credit for”. We have reason to belieye that the temples follow a particular pattern that exploits naturai energy fields found all over the world. According to their hypothesis, the cart ruts and boreholes found across the island formed a network that was probably intended to control energy fields that found their apex in specific points in the templas. “During this past year we have made a number of observations that seem to substantiate our hypothesis and over the coming year we will be monitoring the coastal seabed to validate it.

“If we find submerged temples that follow the pattern we have observed on land, we should be in a position to confirm our line of thought,” he said. Dr Meyer also explained that “there are a number of Sanskrit writings on Maltese temples that may indicate they are actually older than the established estimate, probabbly going back some 10,000 years.

“Dr. Zeitlmair”, he said, “is one of the few individuals who can translate Sanskrit at this levei and the writings seam to point in the direction of Prato’s mention of Aflanfis.

The phrase “at.la.am” meaning “the pillar of the world” refers to Malta”, he said. “We believe that there was an advanced civilization concentrated in colonies that lived along a favourabla weatherbelt going around the world at a latitude of 36 degrees.

“Malta formed the centre of this civilization”, he claimed, “the pillar of the world”. Dr Meyer also showed TMID an interesting model which suggests that the temples may have had roofs and also some artist’s impressions of how the temple might have looked from the inside, giving an idea of its function.

“The roof slabs may have been pierced” he said, “allowing light to enter the temple, possibly giving astronomical time-measuring information”.

The foundation is a non-profit organisation and is currently appealing for donations from the public. More information is available from the foundation on 21574 640, Mobile 9902 2314 or their website www.maltadiscovery.com 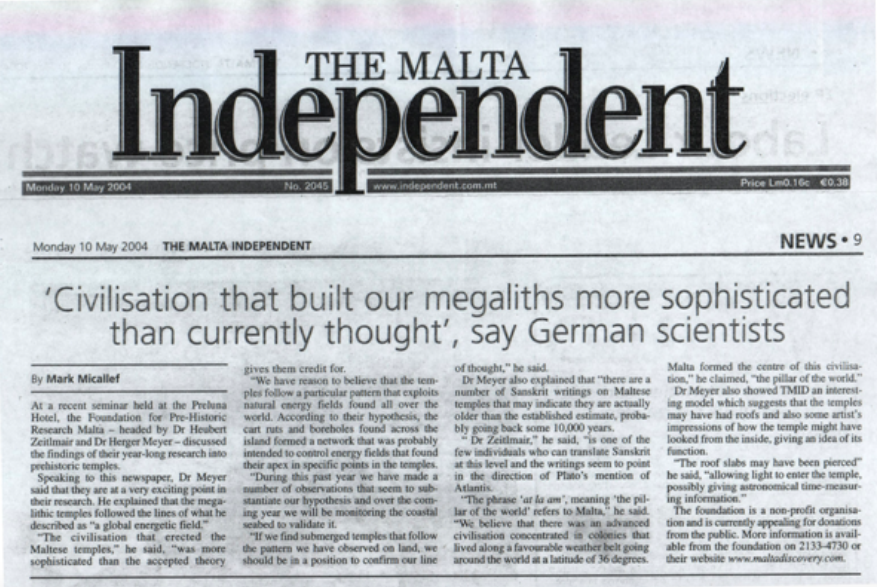