The language of the signs on this stone tablet is a most ancient Sanskrit dialect, a proto-Aryan but not Vedic. Following the method of German linguist Kurt Schildmann†, I was able to decipher and translate these strange signs that point directly to the origins of Atlantis and its end as well!
If you carefully read the very ancient text you are reminded an incident that had happened in the end of the year 2004.

For better understanding we have normalized the spelling of the text. In the original the signs have to be read from the right towards the left. 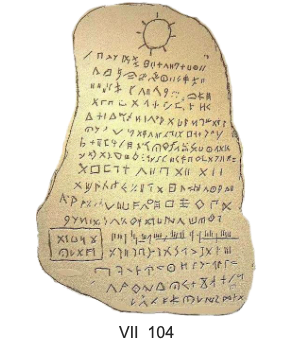 On top Head line pictogram: An eight rayed star behind a circle

ash.ta.ra nau =  The Globe like star ship by the number of Eight.

The Eight – the Star-like satellite of our solar system!

the circling one, oh Sublime princess from the eight (planet satellite)

among the thirties, whose actions are globe girdling to the

in procreating engenders of life; the Thirties, and the god like man

(A.su.ra/Dshinn) among them included.  The high one, the second of

resting wind maker. The god like man among the Thirties,

whose incite evil however, might be punished by their own breath …

Base the rapid Whirlwind.

sunshine. This (event) shall also cause series of conversations.

ships of the god like man among the Thirties; this will be a

that shall be  done by the circling twin one.

which is causing tears. This however, is still invisible for him the

out-looking man upon the mount who had announced.

Thirties widely fail the circling skipper instead, their Nuclear arms are

boiling the life on earth, which was created by the mother. (With this

the God-like have caused a big disaster that was not happen before).

noble son however, is the man in the advancing circling wheel of life

who is apprehending (what shall happen).

are named, these bodies have to be removed.

filed by the responsible at the Base ship; otherwise lolling, lisping,

vanish, you the Herald man of script, and highest one of the

Abode of magic’s (the Head quarter of Atlantis).

of the living  mother!

Me, and therefore I am interconnected with you me, YOU have also

created in this way (the scribe of this tablet)!

The living highest females` noble son, who is the famous

scribe for the Noble Mistress of her genus the Earthborn

thirties (Humanity). She is the Queen of Atlantis …

Stone type: Montmonilonits – not shape able clay stone with portions of Calcite (CaCo3), Quartz and Glimmers. The layer silicate has crystallized very well. The signs itself on the slab are weathered exactly like the rock.

»It is undoubtedly an original engraved stone!!«

For further information please click   The Riddle of Poseidon