In addition to the ring arrangement of the currently 24 of 36 above-ground, round, heart-shaped megalithic transmitter and receiver temples, the so-called “cart ruts” are always in their immediate vicinity.

Like the temple complexes, the cart rods can also be found at all prominent topographical points on the islands. You can find them from almost 266 meters above sea level to sea level and also below sea level, because considerable parts of the former northwest, north and northeast plateau are now flooded by the sea; this fact suggests a methusal age of the cart tracks. In my opinion, the cart rods, like the temple complexes, were cut into the limestone, which was still soft at the time, in the early days of the Atlantis Empire, i.e. approximately 130,000 years ago.

The topographic overall impression of the terrain on which these networks are always located above a valley floor, reminiscent of the ranks of a Greek “amphitheater”. The furrows we examined in different places always run parallel in pairs. The distance measured from furrow center to furrow center is almost always 1.37 meters. Occasionally they differ by a few centimeters, presumably due to erosion. This small discrepancy is of course not noticeable with the naked eye on the course of the furrow pairs, a yardstick is required. Clearly noticeable, however, are the deviations in the width of the individual furrows, which range between approximately 11 centimeters and just under 60 centimeters.

In all cases, however, the width of the furrows on the surface is greater than on the bottom of the foundation, which is always more or less rounded; the cross section reveals the conical shape of a trapezoid. Even more remarkable is the difference in the depth of the furrows, which can vary from a barely noticeable incision of a few centimeters to an astonishing 70 centimeters.

In certain systems we were able to prove that the depth of the furrows shows the variation just described, even over a very short distance. The pairs of furrows always run fairly parallel to one another. Often they cross at different angles, or two or more Ruts tracks converge to one and then separate again. It also happens that the pairs of furrows suddenly turn and run back. The closest twist that we could detect had a radius of 4.25 meters. Few of the rods hold the same level during their visible course.

Most of the furrows that can still be recognized move up and down in the nature of the terrain. It happens that they overcome a difference in altitude of more than 66 meters over a distance of 300 meters in a serpentine run. Unfortunately, most of the systems are almost completely built over, or only a few sets of these furrows are perceptible over a few meters. Fortunately, Clapham Junction’s Cart Ruts network is still fully visible in an area of well over 90,000 square feet. For this reason, we were able to prove that the arrangement of supposed »cart ruts« … cart tracks, is in reality a »highly intelligent« network of small channels to reduce the flow speed of the rainwater falling down the bare slopes.

And indeed, this spectacle, we were able to experience in June 2003 in this network itself.

In the pouring rain standing, which in Malta is always a downpour, we were able to observe how the speed of serving slope down shooting, unruly wild rainwater from the small channels has clearly slowed down in its flow. On this occasion we could additionally registered as the water was sometimes led into its river slope upwards, which Gravity physically actually impossible. The whole event actually gave us the impression of an intended and controlled rainwater guide and drainage network, which is only noticeable and therefore recognizable when it rains. In the valley basin, the Ruts fan out to form a delta, similar to the Nile Delta, where the water, which has now almost come to a standstill, flows from many circular openings in the rock floor,drained away downwards without any puddling.

This apparent tangle of cart tracks is, in reality, a well thought-out, highly intelligent water management system and perfect drainage. Our further investigations of this valley bottom showed … the whole bottom of the depression resembles a “calender sieve”. As we later discovered, the holes in the rocky sieve revealed themselves to be the openings of drop tubes with a diameter of 0.259 meters descending into the rock. These fall tubes then flow into two horizontally running annular canal tubes at a depth of 30 meters.

The Ruts are an essential part of the huge, impulse-controlled power plant for the generation of highly radiation-active, but not lethal energy. The power plant operates on the same pattern as our earth and how the galaxy in which we find ourselves.

By means of this energy we can renew our body cells ourselves and supplement them with fresh breath of life and that is exactly God’s plan of life …
“Everything arises again from itself”! 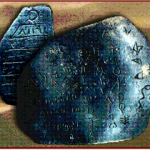 The contents of the stone tablet texts are extremely clear in this regard!

More during the pilgrimage to Malta and at my seminary / price at the origin of your personality …. See link ” Pilgrimages to the archipelago of femininity “