Even here the language of the signs on this stone tablet is the most ancient proto-Sanskrit dialect. This tablet was deciphered and translated by my teacher the German linguist Kurt Schildmann† in the year 1997. 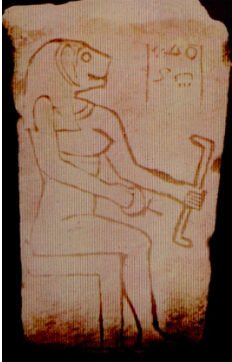 The text leads us directly to the last phase before the final break down of the imperialistic One-World regime of the A.su.ra-humans. This last period of the Nibiruan Golden age of Atlantis, lasted 21,600 years; a span that is hardly conceivable to us.

Through achievement  risen to the rank of highest  warrior

equal to the mother.

Here is depicted an entity with a young female body and the head of a lioness. The head dress looks Egyptian.

While she holds the Egyptian Ankh, a symbol of life in her right hand, in the left hand she holds a Z-shaped rod. This sign represents the prefix Da, which is being used as an abbreviation for da.i.va – god!

This tablet unequivocally states that the Hybrid beings themselves had become like gods!

When one examines the legends handed down to us, it becomes evident that these creatures were extremely aggressive, vicious to the highest degree and of a brutality, we can hardly imagine even today.

Until in our days the myth of the existence of such hybrid beings therefore hasn’t lost its attractiveness as unsolved puzzle.

Beside the northern Wer-wolves (Human body and a head of a wolve), the many Egyptian animal headed god beings, the Sphinxes and Centaurs. The Cretic Minotauros however, probably is the most popular motive to the representation of a monster until into the present because of the nice written tales about him.

Quotation: Pasphaë, the wife of king Minos of Crete, was falling in love to a white bull. In order to have a sexual unify with the bull she let manufacture a wooden cow model, which was wrapped up with an original skin of a cow. Then she entered into the cow model, and had sexual unify with the bull.  With this sexual unify the Minotauros was begotten and she became pregnant. Thus she gave birth to the Minotauros being a hybrid monster with a human body and the head of a bull.

The legend further tells that all nine years seven boys and seven virgins had to be sacrificed to the Minotauros. Quotation end.

This cut out of the Greek epic world makes clear, that the Gods (Nibiruans from Atlantis) were not involved in this matter but human!

There is no question the paragraph clearly tell that the creation of the Minotauros and in consequence all the other hybrids of this kind are a human gen-production, and from the tone we could hear about from our translated stone tablet texts this has considered a NOT allowed intervention into the highness of the paramount authority of the Nibiruans and their replacements at the Lam.ha.sha.ra tSi.dha satellite in our solar system.

Another hint is to be found in the Egyptian mythology that refers to as the lion-headed goddess Sekhmet, which was regarded as an extremely aggressive, brutal and bloodthirsty warrior female, before whom one had fearing.

This is however, not the only one statement that considered Sekhmet and the other animal-headed monsters as Gods.

Doubtless those creatures indeed had existed! Calling them gods is a totally false confused opinion, and should be rid off as soon as possible!

Those hybrid monsters were the creatures of the autocratic human race of the Giants taught by the A.su.ras, who had created by means of genetic engineering, a slave race useful and (at first) flexible for their purposes.

To this, I can only express:

Focus your attention to the recommencement in present time!