(the following is a Composite English translation)

UNIQIJE DISCOVERY IN THE MALTESE SEAS – Discovery of Structures that resemble megalithic temples in Maltese waters, by Dione Borg.

Based on the Information that Il-Mument has, this discovery has already been reported in Augsburg, Gerrnany by Professor and Archaeologist Hubert Zeitlrrair, in a meeting of the Association of Phenomena & Metaphysics, on the 18th of August 1999.

Effectively, the discovery was made on the 13th of July 1999 at 10 a.m. and was photographed. The diver/cameraman who filmed the structums was Slnaun Arrigo, while the plhotographer who took the photos was his brother Kurt.

Il-Mument interviewed professor Zeitlmair who explained that these structures are two stone circles. Also, with them are other fallen and broken Structures which are long and rectangular and on a sort of platform. They were found in depth at approximately  8 to 19 meters around 3km off the East coast of Malta.

Prof. Zeitlmair also said that these structures are füll of vegetation, however it can clearly be seen from the photos and film footage that they resernble a lot of the temples from the period of Hagar Qim.

In the zone where the underwater structures have been found, it seems there are also some form of (cart) ruts whiclh resemble those found around on the island.

The discovery of these structures will have diverse archaeological interpretations and the first implications are that this coutd be cornpared with the temples of Hagar Qim, Ggantija, Mnajdra and the Hypogeum, which go back to around 3800 BC.

This archaeological discovery has also brought about the discussion amongst archaeologists regarding the period tn which they Ware built. Prof. Zeitlmair sustains that these structures were buuilt a lot earlier than the megalithic temples in Malta and the questions that he is trying to answer are; who built these structures, when did they build them and for what purpose?

From these books, and based on how the prehistoric temples were built in Malta and Goze, Zeitlmair came out with ihe possibiiity of more temples and prehistoric structures that are not excavated or djscovered. lt seems that Ihe thesis of the German archaeologist was bullt around the possibility that these structures will be found in the Maltese territorial waters. 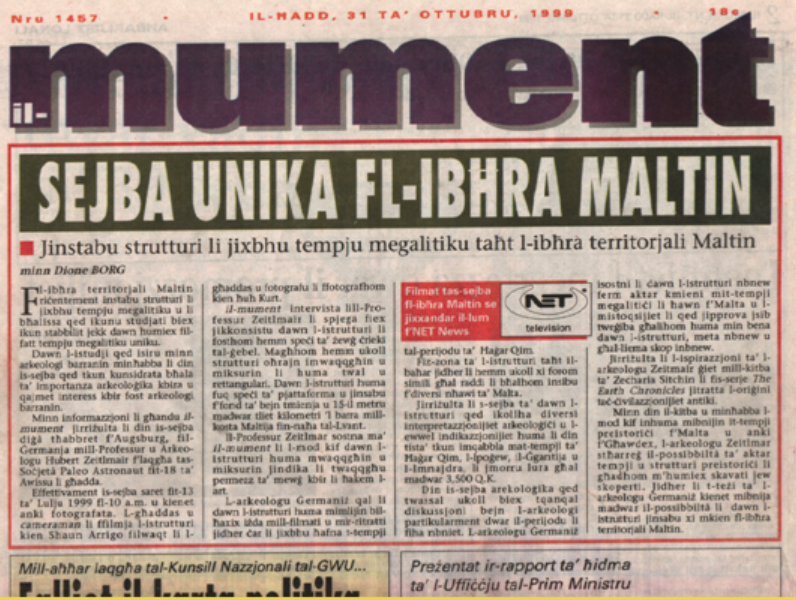