Banished in a crystalized capsule

Regarding this controversial topic, during my Seminars/Courses on Malta you will receive a detailed explanation! Meanwhile have a look at “Pilgrim’s trip to the island of the Goddess!”

Here also the language of the marks on the stone tablet is in the proto-Sanskrit dialect ie. proto-Aryan not Vedic Sanskrit.  Following the method of the German linguist Kurt Schildmann†, I was able to decipher and translate this language which is familiar to me!

The story of this text which is about 4,300 years old portrays the retreat of the leader into a sealed chamber during the end phase of the Atlantis era in order to preserve her body for a return in a remote time in the future!

The stone itself has the shape of a head, which is already significantly symbolic and begs to be decoded! To whom does this head shape belong?

The signs on the tablet can be read from different angles as one turns the stone 90° degrees in a counter clockwise direction; it was indeed  created in a most intelligent way!

Thus I have to remark here: These signs and their construction are definitely not of this world; they originate from another, an extraterrestrial world! As far as I know, the construction of this writing doesn’t have any historic predecessor, in none of the ancient civilizations we know of. 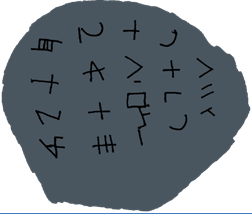 The four lines are readable in horizontal direction from left to right:

Because of the evil (caused by a certain group of humans), the head had hidden herself from people’s sight.

a chamber) surrounded by circling, transparent waves. The breath of …

The Ice blue crystal, is it a… time capsule?

In a short time, you are found out!

then right to  left: 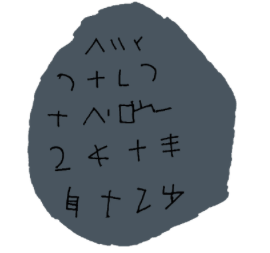 It is so! The  disastrous acts are  in full action at the head’s residence,

the, from circling waves surrounded neutral place, which is…

beaming powerfully.  This place in which, because of the evil of a certain group among the thirties (-humans),

the  noble Queen for her regeneration is sleeping bounded by means of a ban curse!

The third reading of the vertically turned stone tablet takes place from the left hand side from above downward and always from left to right:

A loud  exclamation  shall be heard because of the  ongoing violence,

from the Designer(ess), whose fate is overshadowed by a  curse banning intruders.

Send a Lightning a flash, your Noble ones from the orbiting Star-base, so that the danger to the regeneration is stopped…

is swept powerfully away, from the residence of the thirty-(humans) living Queen!

Stone type: Montmonoliths – It is a not malleable clay stone with portions of Calcite (CaCo3), Quartz and Glimmers crystals. The layer of silicate is very well crystalized as well.

»These engraved slabs are undoubtedly original copies and no fakes!!«

This 4,300 year old writing hides a prediction in an anagram! Namely: There will be efforts to inhibit the regeneration of the Queen Ashtar-tara in the future. And we can see how this is presently taking place in Malta!!!

In my opinion, the planners of fate, that is Ashtara the Rose of Sha.ra.an and her staff in the 3 Star-Base-ships, however, have created precautionary measures so that this will not come about!

Nobody is allowed to break the seal in order to step in this particular chamber, except the »one« who will have the permission!

Below I present another but essentially younger text that deals with the mystery of Ashtar-tara, Poseidon, and the  banning curse in the rock and the time capsule.

It is a Phoenician text also available in Egyptian hieroglyphs. It tells the story of God Poseidon’s love for his spouse and her seemingly tragic end.  With the emergence of Islam, the Phoenician copy was later translated into Arabic and from there into Greek.  I have in my possession a version in English, which retains the rhyme without changing the meaning of the wording and retains the effect of the verse without subjective interpretation.

This epilogue is here reproduced in full

He (Poseidon) saw her hair as dark as charcoal. Beheld her beautiful ivory face with two big eyes that shone like diamonds, and Orichalcum (=red)  sensual red lips that smelt combative.

From silky neck his gaze then wandered to golden breasts that looked aside; to waist and buttocks of white marble. That made his deep groin there abide.

Poseidon loved her from that moment, adored her all; her proportions and her grace. Made her Queen of his kingdom, and Mistress of her kind.

Her bronze body he made eternal (immortal) at the temple (centre) of his kingdom (Atlantis) that he protected. He forced her within the stone cave and cast an everlasting spell.

But SHE is still alive amongst her people, Her kind and Theirs did not immerse. Because he (Poseidon) retained her body beneath deep rock and protected her with a curse to guard her from intruders!

The story written in verse unmistakably states that Queen Ashtar-tara of Atlantis is the most beautiful woman man have ever seen. She is not dead because her body was made immortal. The sealed (magic) chamber is deep down inside the mountain where she rests protected by an everlasting spell! The sealed magic chamber and the surrounding area are enveloped by electromagnetic waves like an Ice crystal. There she is in a state of suspended animation… Samādhi; that is…

The neutral place is crystalized chamber, which is a time capsule

Even the expression: ‘She still lives amongst her people’, is an unambiguous hint that she is not dead.

The story of this text is totally different from others. It gives another, a completely new meaning to the countless Atlantis-stories. In it one finds both the beautiful of it as well as the seemingly uncanny part of the events.

Furthermore it is repeated that the »one« who possesses the key to this knowledge, holds the “more supremely cosmic wisdom” that metaphorically refers to  the sign of Aries!

Ashtar-tara is the female reflection of Ashtara, the mistress of the eight. Ashtar-tara  literally translated means:

»Vessel of the mistress of the 8»«

2, The »Theirs« are Ashtar-taras personal blood line of the original Royal

3, The ‘Thirties’ are the most recent genetic manipulation with the gender Homo Sapien! This intervention into the genetic makeup DNA took place in the thirtieth Shar before the flood that is 108,000 years. If one dates the time of the flood as approximately 11.795 years ago, this manipulation of our DNA took place some 119,795 years ago. The thirties are our direct predecessors!

According to the Sumerian records 1 shar is a prehistoric tool to measure time. So 1 shar corresponds to 3,600 earth years.