The signs on this stone tablet can be read with the mentioned most ancient proto-Sanskrit dialect, which is proto-Aryan but not Vedic. Following the method of German linguist Kurt Schildmann†, I was able to decipher and translate these strange signs. 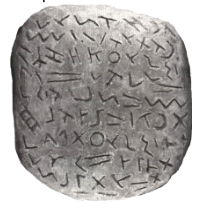 The text below is the one of the most important available to me. It leads us directly into the last years before the final downfall of the imperialistic one-world regime of the A.su.ra-humans, which took place incredibly during the 21,600 year phase of the Nibiruan Atlantis Empire. It describes very clearly the final battle between our extraterrestrial protectors on earth and a group of Apostate out of the Asu.ras and their allied impure humanoid race of man the giants together with the slave hybrid creatures (Body of a human and Head of a beast; look at vi.ra 37 hybrid being). It further tells us who it was that called for the annihilation of the A impure but it also clearly tell us who executed the order for their annihilation!

But note: This event did not cause the flood that destroyed the civilization of Atlantis. This came later on after the murder of the extraterrestrial Lord Protector!

their survival; but without success because they were vanquished!

by means of their army’s flashing operations. Their Army and Air force

are devastating and deathly for all living creatures procreated by the

Not even Noble blood was respected by them!

Thus the hero (Lord Protector) requested for the

annihilation of the demons1 that should be done quite

effectively. The attacks (of the Nibiruan Atlantis army) however,

were not only limited to  the destruction of th damned chariots

(of the demons`) but  also the

annihilation of the the impure Human race and the Hybrid creatures.

army) were also devastating the abodes of Motherhood (Gene-

..without delight they did it. Because the A.su.ra  and their Human

race including the Hybrid creatures were weak (without any chance),

barely alive they were. Then their leaders the proud noble A.su.ra

removed their fastening belts and left the chariot (the state ship).

Note: If one reads line 4 from right to left one will find a hidden

They from the thunderous star, without the assistance of the

Venus (this is an other name for Queen Ashtar-tara of Atlantis),

with a lightning-, or laser beam they…

The text above implies that the A.su.ra Imperial regime and their allied   Humans including the Hybrid slave creatures were annihilated and their dependent territories were destroyed by the Nibiruans from the Lamhashara II satellite by means of a vast Z-pinch laser beam.

In their presumptuousness and their strong »lust for power« the A.su.ras had forgotten the power of higher authority of their creators, the Lord Protector of earth and Queen Ashtar-tara!

Thus the declaration of war against extraterrestrial beings was the most fatal action that human-like leaders could ever do!

We should keep in mind that the A.su.ra humans were much more developed than we are today!

The Asura human-like entities had been created after Asuara tSi.dha and Ashtar-tara by the Queen of the 3 heaven Ashtara at the Lamhashara.

The impure ones that we know as Giants are the result of sexual unify between Asuras and earthborn humans. This type of human-being is on a much higher level of consciousness than we. A number of them however, survived, and as they have a very similar appearance to us they are very hard to recognize. But most of the time they remain invisible to us let their puppets do the work!

A.su.ra aka Dschinn are the demons known from the Indus mythology! The word A.su.ra is of proto-Sanskrit language that means:

Those who was given life (by not smokes fire).