She (Goddess) appeared to us, (Hubertus and his 6 Knights), like a structure entirely of light, woven with shimmering gold. Her appearance was of a young but highness woman whose extremely transparent fine body tissue looked like green glass. This translucent body was slender and agile, manifested to a miraculous shape half pure girl and half ripe woman; and I (Hubertus) thought… undoubtedly she could not be of this world!

And as the shimmering vision gradually became more dense, it took the shape of a woman’s’ body that become more solid and could be seen more clearly. She was wearing a long gown, entirely made of small golden elongated leaves like the skin of a reptile. Her beautiful face was thin and pale and utterly wonderful; her eyes, hair and the nails of her fingers shone like honey-colored amber, whilst a golden forehead-band held her long thick hair in place, hair which reached to her waist. On the forehead-band there was a golden lying horned crescent moon with a disk in the middle shining gold like the sun.

And Hubertus further said… Her superhuman big eyes looked at us and her lips seemed to glow; it was the most beautiful woman’s picture that a man could ever see, but still translucent and not of human kind. We were startled but nevertheless we had no fear in her presence.

In the further course the transparencies of her shape vanished and her body became solidly and touchable. Then she took two steps towards us, smiled and her eyes were full of kindness. And all the light, which illuminated the grotto, came exclusively from her enormously beaming body and we were as paralyzed… no one of us had the courage to ask, and could not open the mouth as well. We immediately knew that she was not a Djinn demon, but rather only good things could come from her.

Then, as the materializing was finished and her body became very solid she spoke to us, with a clear comprehensible and soft voice…

“I called you – without you knowing it”. “You came – without knowing beforehand the location of this place.” Because you and yours are seekers among the people of this world; you are the chosen few, thus You will find! Therefore here and in this night, you will receive and realize what will come to pass, and will have again its validity in the remote future”!

Now as her words had broken the tension, I (Hubertus) had the courage to speak, and asked her who she was?

Here with the following reply she makes it clear that she is an aspect of Ishtar aka Ash.tara ≈ Ash.tar-ta.ra the Mistress of Atlantis!

She answered immediately, “I’m… Ishtar isai!“, the people who had once admired me here in this place used to call me Astarte or Tanit respectively; people in the North who were your ancestors called me… Sigrun or Idun; thus in the times I was given by each people a different name how they understood it after their language or dialect.”

According to my stone tablet translations I name her: Ash.tar-ta.ra, Mistress of Atlantis! She is the Earth aspect of Ash.tara, Queen of 2 Heaven also named “Rose of Sharōn“, or the “Rose of the circling mighty bright shining Light in the sky“! Her major symbol is a forehead-band with a horned crescent moon, and a disk in the midst but a V on the tip of a ∆ ≈ vi.u.pama  is her symbol too. This representation is a clear indication of the goddess’s duality. The symbol at the forehead ring testifies the simultaneously presence of 1 Spirit in 2 people; above in a Heavenly body as Ash.ta.ra, and below on Earth as Ash.tar-ta.ra, Mistress of Atlantis, and vi.upama means “highest femininity”; these personalities are of Extraterrestrial origin Ash.tar-ta.ra  is still alive here on earth but invisible for us!!! Quotation ends

Hubertus further spoke… I was surprised, stared at her and she smiled seemingly seductively at me, then suddenly one of my comrades said that “he and his comrades were true to the Lord Christ and would never want to pay homage to another deity even, if she were the female beauty herself”.

Ischtar looked at him typically in the way a woman does and it seemed she found the remark of the brother funny; I (Hubertus) meanwhile felt a shiver run through my body because…

Ishtar isai ≈ Ishtar she who is answered: “Well, I heard your prayers to him, my divine brother. He however, is in his realm, but I, the divine Twin sister, remained here… since a little while.”

With these words, Ishtar she who is went on three small steps towards me Hubertus to stand directly before me so that I could feel the indescribable enormously beaming of her body.

My comment about:  That what Hubertus felt, was the mightily beaming electromagnetic power, for which he hadn’t have any words at that time!

She continued speaking with authority and absolute confidence and pulled forth a blue feather from her belt, and held it in her right hand. Then suddenly the feather became a dagger and Ishtar spoke to us: “As the mild feather is changed into a dagger in the twinkling of an eye, the deity of love will change into the war deity, if the need arises to punish the Impure.” Ishtar now turned the dagger in her dainty hand, and immediately it became again the small blue feather, which she put back again into the amber-colored belt. Thereafter she continued to speak:

“You and yours are the really seekers among the people in this time therefore you are the chosen few and you will find!” In consequence of this I Hubertus received … the “message of the Goddess”, as to say I received her instruction!

Ishtar told me… “You and your comrades are instructed to travel with my guidance to an old stone (mount), far from this place here! There, search for my symbol and the sign of the greeting hand.

“Good that nobody knows, what this exactly means!!!” Authors comment

Within this stone/Mount deep down in a grotto-like chamber, you will discover why you needed to search for and come to this mount! In this rock there is stored a part of my divine brother’s bequest, which is:

“The content of his gospel however, in truth it is so differently to that what you think to know about it. Also in this grotto-like chamber you are instructed to put the Message I will tell you later.”

She now went to the stump of a burst stone-pedestal in order to sit down. As she sat, parts of her long amber-colored hair touched the stone-pedestal through what the rock began to shine, and it became really light around her.

On a signal, I (Hubertus) and my comrades sat down in front of her in order to listen to the further words, she then spoke:

“What you should take and store in mind is the knowledge about an event that occurred in the far remote past. This is… “Once, the people of Bab.il have originated by me (Ash.tar-ta.ra) and the deity (Ash.ta.ra) within me. In fact they were excellent advanced creatures, who stood because of the clarity of their nature, above all the earthborn life to that time; they were destined to create the empire of the truth;

according to my opinion… Atlantis-Empire.

They built well on it until the impure Giants and their apostate Djinn leaders have destroyed all. Not even the big city at the center of the world (the center of Atlantis territory), the light of the peoples, was able to stop them. Thus all has been destroyed, my headquarter and my Bab.il together with its people some thousand years ago.

Therefore you must go to this certain “far-distant stone” in the Northwest which carries my deity’s sign, and the sign of the greeting hand.

There I will guide you to a certain place where you have to establish a new home for me because this new place should become my northern headquarter, while the old southern one should remain too. Therefore there shall now be always a second one because if a center sinks the destined second one may not sink with!

“In remote times it will be erected a new empire of light. This will be the most recent torch of the divine light… and this torch is destined to illuminate all the life of the world… the whole planet.“

My Comment: Not only human life is meant with the phrase ꞌall the lifeꞌ but all the life of this planet!

Ishtar further spoke… If the sun disk will rise in the morning of the earth’s Autumn Equinox in front of the Aquarius constellation the torch bearer of divine light will return by the magic miracle water of life. The divine brother however, he is a peace prince he is going to establish the destined territory of the light only with truth and the power of the word.

But there, where a fight maybe will be necessary, the deity of the new light empire will be there as well and forcing the victory over numerous enemies. I, Ishtar am the Goddess of war, and together with the heirs of my Bab.il, the Sisterhood of the eternal fires, will be always-there.”

Thereupon, the goddess rose from the seat, and walked to the entrance of the grotto and spoke to me (Hubertus): “Come here put you on my side then now I want to describe you and your comrades the route to the far distant stone/mount!

There at this particular place I will exactly instruct you in erecting the building and a subterranean temple secretly in which you should lay down all the knowledge you still will hear from me; then you will recognize and understand…!

End of the grotto incident

Conclusion: Here during this visionary’s appearance, Hubertus got… the “Order of the goddess”, to make the trip to a “distant mountain” in the Northwest to erect for her and her Sisterhood a camouflaged center. In five years’ time, so the goddess “Ishtar i.sa.i ≈ Ishtar she who is” did further tell she will appear him at the said mountain of the old Gods, the bab.il of the light. Until then, there he should wait and prepare himself for her to receive the important instructions about the coming new “Golden age”!

Continue with the next… Knight Hubertus & the Holy Grail 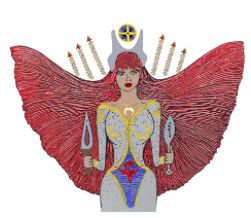