The Herald Of Peace

The story of the text leads us directly into the time where the prototype, the Alpha being of the Gender Homo Sapien sapiens was created. This however, is the original “Immaculate Conception” the Fertilization of the test tube, the result a Tube baby was born! It is the first step into an era we call that of Atlantis and its coming golden age!

The language of the signs on this stone tablet is a very ancient Sanskrit dialect; it is proto-Aryan but not Vedic. Following the method of German linguist Kurt Schildmann†, I was able to decipher and translate these strange signs. 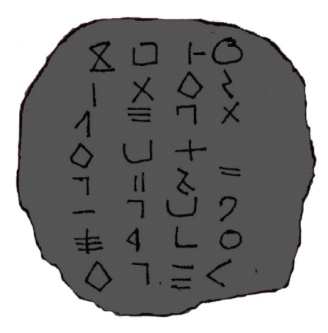 Herald, at the circling Heavenly body…

you was nurtured and

in beauty shaped to become

the father of all. You ask for peace

because this is required

by the mother of great fortune

This is valid for the aggressive ones too, the non-shiny (not

peaceful) ones among the Thirties,

Stone type: Montmonoliths – It is a non- malleable clay stone with portions of Calcite (CaCo3), Quartz and Glimmer crystals. The layer of silicate is very well crystallized as well.

The signs themselves on the slab are weathered and look exactly like the rest of the stone.

»These engraved slabs are therefore undoubtedly original copies and not fakes!! «

From the syllabus of my Mystery-School

The text of this tablet speaks a clear language regarding the extra-terrestrial and therefore super natural descent of the peace prince. The person here marked as herald, on other tablets he is known as Asu.ara tSi.dha, respectively Patha-i-dana (Poseidon).

Further topics of the Seminars/Courses are:

This and much more I teach in the Seminar/Course on Malta…. Have a look at link “Pilgrim trips to the islands of the divine femininity