The Hypogeum of Malta - Part 1

The structural work of art of a mirrored aboveground temple complex, commonly referred to as a hypogeum, is only the small section of a huge labyrinth that extends deep through the entire mountain, which is made of globigerine – sand-lime stone, which is now an island. This craftsmanship of a temple complex, like its above-ground counterparts, is unique in the world.

Since the rediscovery at the beginning of the 20th century and the result of the first investigation by Dr. AA Caruana in January 1902, the hypogeum envelops an aura of mystery. 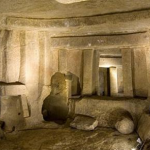 The first officially appointed expert was Brother Emanoel Magri. He headed the excavation from 1903. When he suddenly died in 1907, his records also disappeared. Despite an intensive search, these have been lost to this day.
From 1907, the Maltese physician and archaeologist Prof. Dr. Sir T Themistocles (Themi) Zammit entrusted the continuation of the further excavations. Over the years, this freed the hypogeum of deposited natural alluvial sludge, which, as I claim, got into the hypogeum as a result of the flood. Prof. Zammit clearly differentiated between the washed-in mud deposits and the rubble material that was otherwise still in the hypogeum.
The part of the extensive labyrinth, which is called the hypogeum, is spread over three floors, deep in the rock. Objects from the 18th and 19th centuries were found on the top floor just below the top layer of deposits. Not far from the original entrance, a coin with the portrait of the Grand Master Manuel Pinto da Fonseca was found. These so-called modern objects suggest that the knights of the order wanted to document their presence in the hypogeum for posterity. When the top layer of deposit had been removed, a compact dark layer came under itto the fore. There was no evidence that this was once stored by human hands. Furthermore, no temporally separable individual layers could be detected in this compact deposit; So it is definitely a single storage process, which filled the rooms up to a meter high with sludge that condensed as a result of the drying process. The deposit consisted of red earth, which can still be found today on the Malta archipelago. It was to be found everywhere, even in those rooms that have been very carefully worked on. This picture was presented on all three floors of the hypogeum. The rooms and passages were cleaned centimeter by centimeter from the deposits and it came “exclusively”human remains unearthed; to make it clear … no animal remains were found in it ! To the astonishment of the excavators, the exposed bones and skulls were in a different anatomy, that is: “The human remains did not form skeletons”, but lay confused in the mud deposit. Prof. Zammits’ protocol can be taken verbatim, for example: “Chamber 28 … not a single skeleton could be recovered in a normal position.” In a room measuring 3.17 x 1.20 x 1.00 meters, the remains of around 70 human skeletons were found. There is no question that at a regular burial, no more than 12 bodies could have been buried in this room.
The picture was the same in all the chambers on the three levels; no complete skeletons came to light. A complete foot or a forearm with hand and fingers was found here and there. Among all the bones, six vertebrae of the spine were found positioned in the correct order, but without the columnar process. According to Prof. Zammits’ report, at the end of the excavation the remains of an estimated 7,000 human individuals were uncovered!

The first examinations of the bones and skulls ended extremely amazing, because as it turned out, the finds were exclusively prehistoric types of people! The reason for this finding was the discovery of eleven relatively well-preserved skulls, which were clearly to be assigned to the long-skull variety … “Dolichokephal”. Skulls of this type can still be found in excavations throughout Malta today.
Already during the excavation work of the Mnajdra Temple in 1840, there was a sensational find in this regard. A completely preserved baby skeleton including Dolichokephal skull could be excavated there. Unfortunately, this find found its way into a private collection and will likely never be accessible to the public again.
Of the eleven long skulls seized from the hypogeum, five disappeared over time. The remaining six are still owned by the museum administration. The Dolichokephal skull type can be clearly assigned to the 1.60 m small, stocky, stocky Homo Sapien sapiens Neanderthalensis, which, according to scientific opinion, has been extinct since the end of the last ice age. These and other finds support my age calculations that all Maltese temples must have existed during the last ice age. How else would 7,000 human skeletons of the Neanderthal man get into the hypogeum and others of the same type into other underground structures. 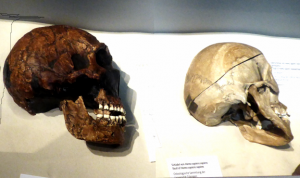 At the end of the excavation work, Prof. Dr. Zammit in front of a system distributed over three levels, which had a total of 29 chambers or rooms.

With their excavation reports, Dr. AA Caruana, in January 1902, Prof. Sir Themistocles (Themi) Zammit, in 1910 and RN Bradley in February 1913 unequivocally that it is in those found in the Hypogeum mortal human remains not handle burials!

Is it, as it is arrogantly asserted today, that it was a place of the cult of the dead?

Based on the excavation reports at first hand, I say clearly … NO !!!

But the question remains … what were 7,000 people doing down there and how did they die?

In Hypogeum Part 2 you will find the answer!