The Hypogeum of Malta - Part 2

The hypogeum with its extensive paths, caverns and niches is indeed like a labyrinth. However, it is only the tip of a labyrinth network, invisible to our eyes, which is shaped like a beehive in the shape of a honeycomb. 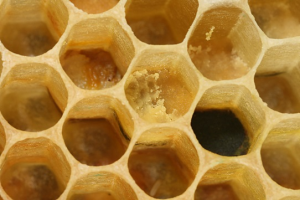 On all three levels, some of the chambers have been very carefully expanded and decorated, while others have not. So it could have been work or storage rooms. As the investigations up to 1910 showed, the chambers, expertly carved out of the rock, contain a wealth of artistic furnishings. All rooms and corridors were originally designed in red mineral paint. The wall surfaces are adorned with animal motifs and Archimedean spirals connected with straight lines; In my opinion, this is the movement of stylized electromagnetic waves of a certain frequency! In addition, there are also geometric figures, such as hexagons (hexagons) or petroglyphs (characters).These motifs were either painted or engraved on the smooth rock. The predominantly red color used for this was obtained from the abundant Ferroocker. Silicates and sometimes wax were used as binders or fixatives!

According to the recordings, there is the engraved symbol of the “Greeting Hand” on the wall surface in the entrance area of ​​the so-called oracle room. The palm has the dimensions of 21.5 x 10 cm; it is therefore larger than that of the average person today. In at least four chambers, disks painted on the walls appear ≈ disks arranged in groups of three disks each; this order of formation flight can also be seen in the aircraft of a modern air force. But below the group of three there is another disk, which has a point in the middle ⊙. All discs have a diameter of 0.25 m. Unfortunately, these drawings,or engraved representations no longer perceive today because of the steadily increasing soiling of the walls by limescale deposits!

The circum-point ⊙ has the meaning si.nau in the proto-Sanskrit language and that means “base ship” or space city! The people who were in the hypogeum must have been literate and aware of the meaning of the representation. And as you will soon find out, the Neanderthals could compose texts, that is, write in a script that required a high level of intelligence and skill; so they knew very well what they were writing on the walls! 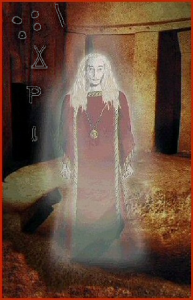 When I edited the book cover for my book and had the adjacent illustration put together, 3 rows of characters came to light on the left side of the photograph in the original picture from the hypogeum of the 1950s. The arrangement of the characters corresponds to the description of geometric figures from the excavation report from 1910.
The characters belong to the proto-Sanskrit dialect I know. I am able to decipher the script and translate it as a result. As always, the short text is written in a kind of telegram style … it is disturbing and sensational at the same time.

Everyone has to let the lines of the following text from the wall of the holy of holies sink in. For my part, I took it on as both an indictment and a warning. 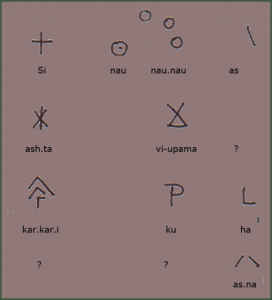 the base star (circling in front of the moon),

> Kar.i.kar? ku ha
> is collecting tribute (demanding sacrifice) lively (in full swing)
? ? ? as-na
by means of the radiation of the crystal stone.

The text is a further legacy to be able to get an idea of ​​the last days of Atlantis. The text on the memorial stone pillar in the temple of Hagar Qim, the text on a stone block from the Tas Silg temple are for me evidence that before the global catastrophe about 11,000 years ago and the final end of Atlantis, a terrible one, with radiation weapons waged war preceded; in any case it all fits together!

Another testimony to the tsunamis that created the Mediterranean Sea is the topsoil, consisting of red earth, which was deposited in the underground monuments. About one kilometer from the Hal Saflieni Hypogeum there is another hypogeum in the village of Santa Lucia. This monument represents a smaller version of the Hal Saflieni Hypogeum. This underground structure with its megalithic entrance area and interior design is also identical to the 25 stone circles of the temple standing on the surface.
Alluvial deposits with human remains, amulets and ceramic shards can also be found here, well mixed with topsoil from the red earth of the surrounding area.
Considered in the historical context of the hypogea of ​​Hal Saflieni and Santa Lucia, it is clear and could not be better formulated by the director of the Archaeological Museum of Valletta, FS Mallia 1974, namely: “The deposits inside the Santa Lucia hypogea come from the surface and were washed into it. “

The hypogea near the surface were therefore places of refuge, i.e. air raid shelters for thousands upon thousands of people! So on the surface there must indeed have been aggressive warlike conditions which were extremely malicious and of a brutality that we, as rational intellectuals, with the best will in the world, cannot imagine!

Aircraft equipped with laser cannons devastated entire areas of land during this phase of the war. Due to the intensity of the rays, all matter evaporated, glazed or petrified. The bodies of their random victims, human or animal, were transformed into unrecognizable glass-like stone structures. In others, where the radiation was not intense, their hair and nails fell out. Clay pots broke for no apparent reason and after a short time all food and drinks were inedible or contaminated. Mighty mammoth elephants and other land animals of the most differentiated species (predators and herbivores) ran away in frantic flight and sought refuge in caves such as the Ghar Dalam Cave and others in the south of Malta;the contamination of the environment caused by the use of radiation weapons must have been considerable!
And, as a result of the constant abuse of radiation-active electromagnetic energy at an extremely high level, the greats / giants generated an artificial solar storm that led to violent instabilities inside the earth. To prevent the worst from happening, Queen Ashtara intervened directly from one of her 2 base stars. The enormous magnetic field of the base star (Si.nau) discharged in the form of a huge lightning bolt, which hit the area of ​​the southeast Indian Ocean and triggered seismic shock waves there.

This is documented in the Mesopotamian Flood history,
… so that the wells opened deep in the south and poured out.

The shock waves caused the flood, it was a huge tsunami that came as a complete surprise for everyone involved on earth and that explains the many millions of deaths (humans and animals) around the globe.
The climax of the punitive expedition with the subsequent cataclysmic upheaval of the earth’s crust was either misjudged or not expected. They drowned miserably in their supposedly safe hypogea of ​​Hal-Saflieni, Santa Lucia and others, were torn to pieces by the water masses of the tsunami, whirled through and buried by the mud they carried with them. The animals experienced the same, their bodies were also torn and mixed with alluvial sludge in the caves, such as the Ghar Dalam cave in Malta.

My spiritual truths tell you that our entire existence on earth has to do exclusively with the planet Nibiru and its inhabitants, regardless of whether the planet is present in our solar system or not, because here they have 2 huge base stars and a space station permanently stationed near the earth. These artificial celestial bodies house a highly developed human life from another world that is hardly imaginable for us. 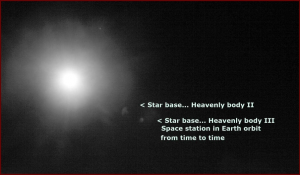 Taken from the UK Antarctic Research Station Halley
in December 2012

Part of their super matrix is ​​in one of the 2 base stars and the other on earth … everything is duality !!
With regard to ages, with regard to annual cycles, with regard to particular places … It is ALONE given to those who have named the name of the Goddess, those who bear the mark of calling and election on the DNA in the stem of their bodies; OGH!