Protector of the Mistress of Atlantis

Even here the language of the signs on the tablet is of a very ancient Sanskrit dialect; it is proto-Aryan but not Vedic. This tablet was first deciphered and translated by my teacher the German linguist Kurt Schildmann† in the year 1997. Following his method I was able to read and understand these for me not strange signs.

The story engraved on the tablet guides us directly to the beginning of the Era of Atlantis and the initiation of the prince into his office on earth. 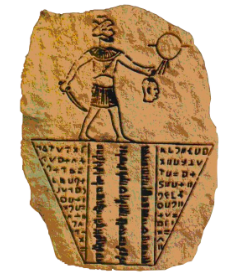 On the tablet top right hand side there is depicted a cross behind a disc, which means: nau.si.tri. At the cross below left there are 2 lines recognizable between 6 and 7 o’clock. The two lines represent the Globe-like spherical Star-bases that left in our Solar system by the Nibiruans. One of the two moves in clockwise direction around the Moon.

The figure with the severed head in hand is a much younger interpretation of the copyist approximately 4,300 years ago how the impure, the badly is to get rid of! We soon will see however, how the Nibiruans are going to solve this problem!

Then in the first two lines the reader is unequivocally told who had been the originator of the miracle of all life within a certain age or a cycle on our planet! It is clearly described… responsible for all that is a Human race situated in circling Star bases. As creators of life in general and especially the life on our planet, they are of course responsible to keep purity the genetic works! In the progress, the text reveals the division of powers and distribution of task in the double–top leadership of the government on the planet!

The foundation of life is the grand work of an eternal age.

It is the work of those from the orbiting one (the heaven-ship in space).

is … to focus their efforts to eliminate the genetic impure, the impure evil.

Referring to the mother’s karma,

and the work of those from the orbiting powerful spherical Star-base,

the herald is praiseworthy.

And the prince initiated by the Supreme One from the orbiting body;

SHE gave him the power of command, him the prince (who also comes) from the orbiting Heavenly body,

in order to protect the Head … (=Ashtar-tara Queen of Atlantis)

…the Moon goddess, the Mistress of the night (=Queen Ashtar-tara).

SHE, the heroine, the

Princess from the, in not too far (distance orbiting) distant 8th Heaven abode of the creators (gave him the power of command)!

From the syllabus of my Mystery-School

The text of this tablet clearly describes the extra-terrestrial descent of the prince. Even here he is mentioned Herald or announcer respectively.  However here, he is called protectors to the first time…. Patha-i-dana.

Further topics of the Seminar/Course are:

This and much more I teach in the Seminar/Course on Malta…. have a look at link “Pilgrim trips to the island group of the divine femininity”