The Knights Order In General 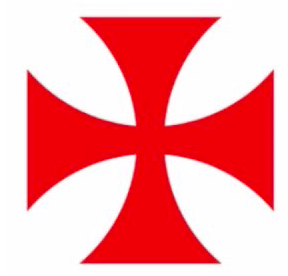 In comparison with the other Orders of Knighthood of the Middle Ages, the Knights Templar has an esoteric and mystical aura about them that cannot be overlooked or neglected! Without this special flair, probably almost no one would be interested in the poor Knight Warriors who did not own any property!

But who and what were the Knights Templar in reality? Does this mystic flair about them have an entitlement?

Well, let me tell! The Order of the company of poor warriors of Christ of the Temple of Solomon (Latin: Pauperes Commilitones Christi Templique Salomonici) was a consequence of the First Crusade and founded around the year 1118. From 1118 until May 1291, the permanent headquarters of the Order was exclusively in the Orient. This fact of course, opened up good contacts and relations with the local intellectual and well educated elite in the territories of the Middle East and Asia Minor.
Similar to the other knight orders of the time the Order of the Templar was a convent-like alternative for second- and third- born young and single noblemen who couldn’t find a wealthy wife or widow or otherwise did not want to find one. In contrast to the other Knight orders however, only this order of knighthood united the ideals of the monks with those of knighthood for an ꞌexclusivelyꞌ military purpose; and, only for this reason the brothers did constitute a homogeneous unit in administrative issues. In all other aspects there were different opinions because of the countless European regions from where they originated with their national and cultural differences.  As a consequence there developed competing groups within the Order itself. Even in religious and spiritual matters the differences among them varied greatly. In fact, between the centuries 1000 and 1300, in the Commanderies of the various European regions, there were many different religious currents!! But this was, in my opinion, typical of the intellectual society of that time, which included women, who enjoyed many more freedoms than in later centuries!

In general, the majority of the Templars embraced more or less a type of heretical Christianity because they considered the cruel Biblical God Yahweh of the Old Testament as the Devil.

While in Ireland, Scotland, England, western and northern France, western and north-western Germany, Gnostic Arian tendencies were widespread. In Eastern and Southern France, Portugal, Spain and the middle part of Germany there prevailed a Gnosticism belief stream that was founded by Marcion of Sinope in 144AD. The Marcionism was an Early Christian dualist belief system, which was also the foundation of the Cathar Faith. However, in southern Germany ie. in the Old Bavarian state below the Danube River, which included Austria and northern Italy, there had developed a Christian Gnosticism that was strongly influenced by the pagan Sumerian/Babylonian faith in the great “Goddess” and her spouse, aka her “Twin Brother”. In order to avoid the violent censorship of the Roman Inquisition, Jesus and Maria Magdalene served as camouflage. However, only in the Bavaria state this established pure pagan faith partly remained! The “Patroness of Bavaria” is a relic of older times. Even in the Catholic parts of the Old Bavarian state, Germany, which once was part of the former duchy, there is still today a widespread and deep devotion to “Our Lady Mary”!

As we now know, the majority of the Knights Templar followed a more or less esoteric and heretic Christianity!

But note that what one considers ꞌesotericꞌ today and that which is unscrupulously sold to us has really almost nothing to do with the original idea. The Templars however undoubtedly were aware of the original concepts and what makes this particular order so fascinating are the activities, which consist of mysterious rites and rituals mentioned in the court files. Thus in order to understand their world and way of thinking, one must impartially focus on their philosophy and mission.

Largely unknown however, are particular mysterious and extremely esoteric rituals, which did not originate from the mental mind of ordinary members but from members of a small community of 11 knights, who were only associated with the Templars. ‘Associated‘ means they were not actually Knights but “Knight Associates”! According to the Templar statutes, the status of an ‘Associate’ was applied for companions who did not want to live under the vow of celibacy; therefore, they were not formally actual members of the Order! Although those Knights carried the specific group emblem on their Templar clothing, the differentiation between a Knight-monk and a Knight-associate was not easily recognizable in the Middle ages.

These Associate-Knights within the Order had special connections with the local intellectual and educated elite of Palestine. Through them they heard of an old religion and of a beautiful goddess and her following of gods who had lived on earth before the great flood. With this new awareness / realization they could gain exceptional esoteric knowledge that was far superior to any knowledge to which the normal European society of the 12th and 13th Centuries could hope to have access!

Presumably the members of the mentioned small Associate-group consisted of exclusively of high degree spiritualists with enormous esoteric knowledge! Thus there is no question that the great goddess       “Ishtar“ ≈ “Ashtar-tara she who is“ appeared seven of this Bavarian “Knights Associate“ group during the return trip from the Orient in about 1219. Since they had been inspired, and instructed by the Divine one, consequently the seven became big innovative thinkers. They received knowledge of a calibre that was not suitable for the public; even that of the present day. Therefore, the nature of this information had to be protected in the inner circle of the Templar community.

With their faith in the Goddess they dared to enter into unknown and even forbidden terrain! It is that mysterious, highly spiritual area of which, for a modern Esoteric better “Exoteric”, almost all knowledge is hidden under the veil of the unfathomable. My experience in this topic tells me: “A person educated in exoteric laboriously explain this high spiritual knowledge as a phenomena and code it in symbolism.”

With the correct line of thought however, one is able to discover ancient knowledge there, which leads the capable mind of the seeker to growth, realization and full development!

Later on, thanks to the benevolence of the goddess, all eleven became aware of what is beyond the frequency of the visible, and because of this, they were able to manage their human transience!

This realization however, placed them beyond the powerful sanctions of the Roman church at that time. Since they couldn’t remove the narrow mindedness of the authoritarian Roman church, they kept their explosive knowledge and the new concept of faith hidden where thinking with unlimited horizon could was possible. Consequently this led to the founding of the “SIGNUM SECRETUM TEMPLI” (Secret scientific section), which was within the order as a more or less autonomous branch. The 11 members of the small Bavarian Knights Associate community belonged to this autonomous circle!

The leader of this Associate community was a remarkable, multi-talented personality with refined political acumen.  Unfortunately he is only marginally perceived by historians. But this crusader however, has decisively contributed to one of the most mysterious chapters of the European Middle Ages. To this day, his well-documented inheritance has not lost its mystic explosive nature! After his return from the Orient to Europe around the year 1220, among other things he drafted a completely new social order based on the democratic system of Government of the Sumerian Dingir (Anunaki-Gods). He designed for the many culturally different regional people groups an ‘Ideal State’, the more or less autonomous “United Regions of Europe”!

According to his writings, each region should have a parliamentary committee, with a presiding governor (Grand Commander) to govern it. The regions were overseen by a unifying two chamber committee with a President (Grand master) to preside over it. His philosophy was of an ideal state governed by means of a presidential democracy where people could freely live according to their regional needs!

The territory of this ideal state had to be formed by the kingdom of France and the Holy Roman Empire’s German nation, which had the largest territory at that time.  However, only the thought of wanting to replace the philosophy of a feudal regime with a bill of human rights including the principles of ”Liberty, Equality, and Fraternity” was considered a monstrosity and therefore high treason. In my opinion, this was the real reason, which led to the annulment of the order of the Knights Templar by Pope Clemens V. in March/April 1312. The mysterious heretical activities documented in the court files doubtlessly served merely as a pretext!

For me without question, this radical socio-political philosophy was surely the igniting idea that led to the foundation of the Confoederatio Helvetica (CH – Switzerland) in August 1291, and the United States of America in 1776.

The state form of the “united regions” of Europe however, is still a fiction, isn’t it?

The mystic aura of the stories and legends about the Knights Templar is mainly owed to the community of 11 Associate Knights from a small Templar Commandery at the foot of Mount Untersberg, which was situated in the territory of the Augustinian Convent of the sceptre fief of Berthercatmen. Presently, this region is known as the Berchtesgaden land (kettle) and village on the Bavarian state’s (Germany) farthest south-eastern area near the city of Salzburg/Austria.