Ashtar-tara, Mistress of the Eternal Fires &

The following text results on the fact of memories of the old people after the all destructive Great flood approximately 12,000 years ago. The Queen of the 2 heaven (artificial Star bases)… Ashtara, acts on Earth in the personality of Ashtar-tara, Mistress of Atlantis! 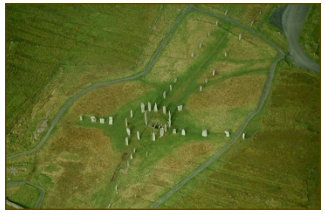 If you go to Scotland’s outer Hebrides to the Island of Lewis , there you will find a Stone-formation called the famous Stones of Callanish. In Sanskrit however, this word is spelled Calanaish! Although this Stone-formation is still almost equally as it was originally erected, it bears a seemingly unexplainable enigma but reveals the secret itself only to insiders, who follow the Great goddess!

Today, it is hardly conceivable that people in a wave of migration left their home in the Mediterranean kettle and immigrated in this rough and meagre land so far north. After their successful settlement however, they undertook incredible efforts in order to build the stone-rows and stone-circles more than 3.000 years ago. Nowadays it is said the Stones of Callanish represents the Celtic cross but what did it represent before the Stone monument was changed into a Christian cross with the circle in the center? Nobody can explain seriously…

Well there is a first small hint because the original language of the Irish and the Scots is Gaelish! This language however, is very familiar to the very old Coptic dialect, which is already a crippled Phoenician dialect! Thus the ancestors of the Celts in Ireland and Scotland had been Phoenicians!! In order to avoid confusion the words Phoenicians and Philistine mean one and the same, namely… Coast-inhabitant; therefore it is most likely that this people had been primeval Celts!

In the days of the Phoenicians who settled around the whole Mediterranean coast line, Queen Ashtar-tara of Atlantis was equivalent to the Phoenician Moon-goddess Astarte. By the most popular Phoenician people, those of the city of Carthage (modern day Tunis/Tunisia), and the neighboring Berber people Tuareq tal-Adrar, she was known as Tanit.  In her Moon-goddess aspect, Astarte/Tanit is NOT equivalent to the lion head human body Monster goddess Sekhmet! Therefore, she never demanded a Child or Human sacrifice. I am in the opinion that evidence of a Carthaginian Child or Human sacrifice is sketchy at best and that these reports are more likely to have been a Roman blood libel against the Carthaginians to justify their conquest and destruction of the city, Carthage including its culture. With the destruction of the Phoenician culture, the knowing of the living goddess Astarte/Tanit aka Ashtar-tara got lost, but a misty memory of her symbol remained.

Later her symbol was adopted by the Egyptians who had been inland inhabitants, without knowing the correct meaning of the symbol. Thus they called it how they simply understood… Ankh, which simple means ꞌLifeꞌ! Thanks to the Goddess that the Carthaginians had protected all the knowing about the symbol in stone, so I am able to explain it after all the centuries past! 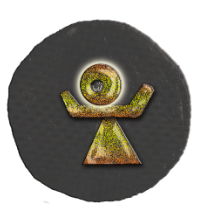 Ashtar-taras symbol, the primeval Ankh, is a cluster ligature of 4 script signs that mean… nau-da-i-sa.ma which translates into English: The 10th Avatar ≈ the 10th the latest (newest) vessel (body)! This explains that Ashtar-taras body had been the last genetically experiment done by our extraterrestrial creators under the leadership of Queen Ashtara in one of the two Heaven (=artificial Star bases)! 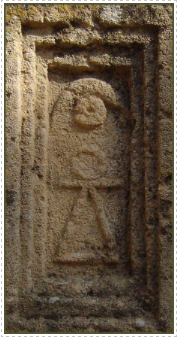 A stone relief, excavated in the ruins of Carthage shows an artificial star and the ligature of the nau-da-i-sa.ma sign in three-dimensional representation. This evidence carved in stone delivers the answer what does the word ꞌheavenꞌ mean?

On top of the nau-da-i-sa.ma pictogram, one clearly recognizes a hemispheric structure, with a round opening in the middle, and an arc above the bulbous structure.

The arc symbolizes wings, something that is able to fly. The other sign is also known as the Circum dot ⊙ ≈ dot in the circle. Thus we can identify a flying object ≈ a Globe-like star base!!

The Circum dot ⊙ was often added by a 30° declined cross. It is said that it represents the fusion of 2 dimensions, two different frequencies or the fusion of divine and human elements (gene-material) to one unit! Last but not least sometimes we find the Circum dot before the cross and a ꞌRoseꞌ, the so-called Rosicrucian! This mean: “The highest creatoress (the red rose) most perfect built domicile”. The Rosi.crucian has one more meaning but this is another chapter.

The ꞌred roseꞌ is equivalent to a woman but our present understanding of a God, still is embossed by the masculine ideas of the three religion-concepts of the Middle East! If we however, go back 4,000 years, in the cultural development, we will recognize really quickly… the original omnipotent deity-idea was ꞌfemaleꞌ. This was always socialized with the Circum dot ⊙ aka Circum dot before the declined cross and the ꞌRoseꞌ and the nau-da-i-sa.ma or Ankh Symbol!

This tells you… “Our Extraterrestrial creators are very alive and invisible still among us! This means… we are not alone!!!”