Regarding this controversial topic, during my Seminars/Courses on Malta you will receive a detailed explanation! Meanwhile have a look at “Pilgrim’s trip to the island of the Goddess!”

The Stone slab of Tal-Qadi

The tablet was found at tal-Qadi temple, 2 km inland from Salina Bay in Malta. Its importance is consistently ignored and its text completely misinterpreted. Many experts solely recognize the symbol of the ‘waxing moon’ and some stars which happen to be eight-rayed, but they totally ignore the strange script-signs on the slab.

If you try to accept, then the world of the explicable opens for you!

The language of the signs on this stone tablet is the already mentioned proto-Sanskrit dialect; it is a very ancient Aryan but not Vedic. Thanks to the German linguist, Kurt Schildmann† I was able to read and understand these, for me not, strange signs and pictograms, which are not only simply asterisks. Therefore If one is able to read these signs, the stone tablet becomes lively and to a significant find, which point directly to a certain period of time during the ages of Atlantis! This significant archaeological discovery sheds light on a range of esoteric details, among them is the layout of our primeval solar system … at the time before the Earth came into being, approximately 3.88 billion years ago; and sheds light on the star-like planet ‘Nibiru’ whose connection with our solar system will shortly be clearly provided. As we may soon discover, the text in the tablet also make references to two of the seven planet-like Nibiruan satellites and its commander in charge.

The slab has the shape of an ‘Aries head’; clearly visible is the muzzle and the nose. On the basis of this shape we can assume that the slab was shaped, and manufactured in the Zodiac-age of the Aries! Since this time a full platonic year, a cycle of 25,920 years plus almost two further platonic months of 4,320 years have passed! 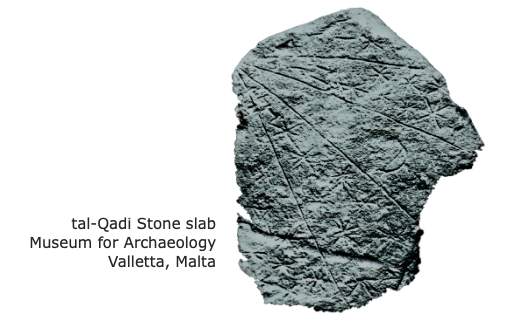 If one takes a look on the tablet from the mentioned view and reads the text in a certain way one recognises instantaneously what the ice age chronicler wanted to tell us about 32.399 years ago

As are many prehistoric texts, the tal-Qadi tablet is another inconvenient record that announces the near end of a cycle. If we want to understand the Temples astronomically orientation and therefore its purpose we must have an understanding about the Earths precession relatively to certain stars. Precession arises because the Earth’s axis of rotation moves around against its rotation (precesses) at a slow rate 1° degree in 72 years completing one revolution every 25,920 years. The effect of precession is that the earth’s axis and therefore its poles revolve with reference to the celestial sphere of fixed stars and consequently stars that are presently visible from a particular temple location of observation may be invisible in a few centuries hence and vice versa for stars which are presently invisible from that latitude.

According to the Greek astronomer Hipparchus (150 BC), who has re-discovered this seemingly general movement of stars he called Precession. He fixed that a precession-cycle starts from the age of Aries, and runs to the Pisces, Aquarius, Capricorn, Sagittarius, and so on till to that of Taurus. From the cycle’s completion up till today two further platonic months of 2,160 years each have passed; i.e., Aries and Pisces, and now entering Aquarius. In fact the tal-Qadi tablet announces the near end of a cycle of 32,400 years! 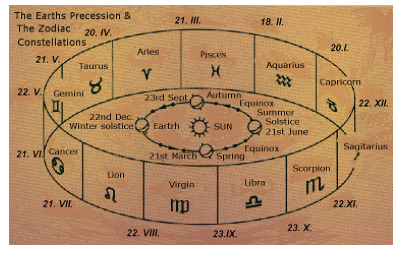 The clustered Sanskrit syllables – as.tra – translate a heavenly body as “inhabitant domicile”, which is a supreme by the number Eight. As we may soon discover, this cosmic body is not our Sun but the most powerful and lofty star-like planet of our solar system by the name ‘Nibiru’, identified and described in an unusual blood-red radiation by the Sumerians.

Nibiru is the eighth heavenly body of the solar system if one starts counting from Earth looking out into space beyond Pluto. 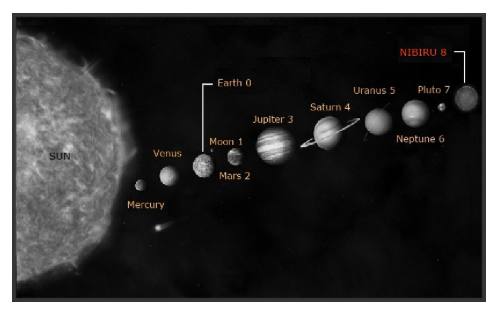 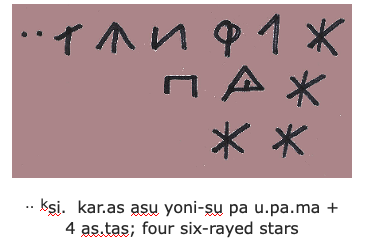