A Couple In Reality?

Regarding this controversial topic, during my Seminars/Courses on Malta you will receive a detailed explanation! Meanwhile have a look at “pilgrim’s trip to the island of the Goddess!”

Approximately 25 centuries ago the concept of a Messiah has been a fundamental principle in many Religions. The Christian Religion particularly borrows its knowledge from an earlier and dubious misty source that increasingly proves to be quite muddy and contradictory in this age of modern enlightenment.

But the core statement of the religion lore, especially the Christian, in general is not in contradiction to the much older texts. Unfortunately, the institutions of the religious communities are much too young to comprehend the fundamental significance of the ancient texts!

This is the reason why religious leaders find difficulty with accepting and therefore conclusively formulate the true identity of the divine personalities (Gods/Goddesses), as well as the original location of the paradise!

Because the text on the older records engraved in stone, give a completely different perspective into the ancient events, the content of these records can be considered plausible even in our present-day time.

In order to be able to understand the concept of a Messiah, one must accept that the concept a Father God would have to be altered to a Mother God instead!

In fulfillment of her fate, the singularity of the entity Mother Goddess, namely… Ashtara, the omnipotent mistress of 3 Star bases, has divided her personality into two further entities for the coming mission on planet Earth; this can be considered as a cell division! She has separated into 3 individual physical bodies, in which is situated one and the same soul or the same Spirit respectively. We all recognize this primeval and first divine concept, as the… »Holy Trinity«!

In this way, the alpha entities of the gender homo Sapien sapiens were created as a Couple, i.e. as man and woman for their coming fate  to live on planet earth. Because of the different polarization of the two sexes + / – they are mutually attracting each other and each one is continuously seeking his polarized twin in order to  reunite with him/her  and  attain wholeness again! The true »Messiah« therefore consists of two people.

The male part is Asu.ara tSi.dha, the noble son. He is the primeval entity of the »peaceful« divine archetype! Not only in Christianity but all Religions I have studied, have adopted him as the foundation of their belief system.

According to the records… 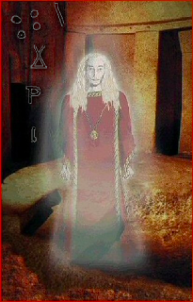 He lost his perfect earth suitable physical body (Avatar) in the cataclysmic end of Atlantis and since then he must wait patiently until he will get such one again; up to this day he has to exist as a spirit! He is known in the Christian tradition as … the ꞌSacred spiritꞌ.

Protector of the earth & Herald of Peace

The female part is the noble daughter Ashtar-tara, the twin sister, the female reflection of Asu.ara tSi.dha. The name Ashtar-tara, it indicates that she is the bearer of a part of Ashtara’s mighty Spirit. Therefore Ashtar-tara was the equivalent daughter and mirror image of Ashtara, the mystic flower. Since she is the female Alpha entity, with her earth-suitable physical body (Avatar) she is the pure matrix of the gender Homo Sapien sapiens. For her protection, before the cataclysmic end of Atlantis she was put to rest in a state of Samādhi in a sealed room beneath her residence!

As entity per excellence in her role as Messianic lady she is not only the »Grail-bearer«, she is the transmitter of the power of those from the »Circling one«, respectively those from the Nibiru as well. Since she was of pure-breed Nibiruan stock, she is the heiress of the original matriarchal Kingship of the Kingdoms on planet Earth; in other words she was Queen of Atlantis. As “Mistress of her kind”, that is the Homo Sapien-sapiens, she became Empress of the Atlantean Commonwealth around the globe.

As I can further quote from my stone tablet translations, Queen Ashtar-tara has enormous mental power. With this she governed the state and the society of Atlantis like a queen bee. In other words, the commonwealth and the society of Atlantis, was organized like a bee state that was kept alive and governed by means of pulsating magnetic waves generated by the queen. That means she continuously influenced in a “positive sense” the course of life and the further evolution of the ice age-man on Earth; the people therefore were mentally tuned to her and guided by her.

Ashtar-tara can be compared to the heart of our physical body. If the heart stops beating the physical body dies; the same happened when Ashtar-tara fell into a state of ꞌdeep slumberꞌ, the state of Samādhi, Atlantis seized to exist!

SHE however, the »Lost Queen« the ‘Roi perdu’ is not dead, She is still among the living but hidden. For a certain time of regeneration she is in a state of self-imposed suspended animation. Rather her fine-etheric body or Spirit is still connected with her physical body by means of a silver cord, which has never been severed! Ashtar-tara’s Spirit can therefore not leave the sealed time capsule chamber permanently!

Stone relief of Ashtar-tara found in a Maltese temple. This site was buried by a mound of sediment from the destructive flood.

Reconstruction of the face in 2 steps by Werner Schulze, Bassum Niedersachsen, Germany

She shall show herself only to those, who have named her true name and understood.

Those who were chosen because they carry her sign and the profession for her imprinted in the DNA of their bodies!